This pattern is still under development

This pattern captures the essence of how parties can be represented in various circumstances, thereby extending the parties, actors, actions pattern.

Within the context of SSI, we are interested in coming to grips with (answering) questions such as 'in what ways can parties be represented?', 'what kind(s) of entities can represent parties', 'how can we deal with representation constraints, i.e. provide guarantees that the represented party isn't completely at the mercy of the one representing it?'.

This model attempts to provide answers to such questions.

There are very many different forms of representation. Claims, for example, represent characteristics attributed to entities, Terms represent (intangible) concepts, legal entities are represented in the knowledge of a jurisdiction, agents represent parties as they execute actions, and so on. We specifically focus on

Merriam-Webster considers both 'the action of representing', i.e. the action or fact of one party standing for another so as to have the rights and duties of the party represented, or the substitution of one party in place of another, e.g. a child taking the place of a deceased parent), and 'the fact of being represented', which is its passive counterpart.

Representation can take an active and a more passive form.

In the active form, a party is represented by an actor that executes an action on behalf of that party, as described in the parties, actors, action pattern. In that pattern, the actor is said to be an agent of the party that it represents as it is executing the action. This kind of representation is short-lived: it exists for the time that the action is being executed.

In the more passive form, a party can be represented by an actor in an employment, or 'works for' relation, which is also described in the parties, actors, action pattern. In that pattern, the actor is said to be an employee of that party, which (in our context) only means that it is realistic to expect that the actor will be executing actions on behalf of that party.

Actors typically do not represent a party for everything. Employees for example are typically assigned a *function* that requires them to do certain kinds of actions, yet at the same time limits them thereto. An (actor in its role of) employee can, or should therefore limit its agency to actions of the type that its employer has assigned as the tasks for the functions it is employed to fulfill.

In this model, we do not consider actors representing parties, as this is already elaborated on in the parties, actors, action model, which defines notions such as agents (and principals)

Here is a visual representation of this pattern, using the following notations and conventions: 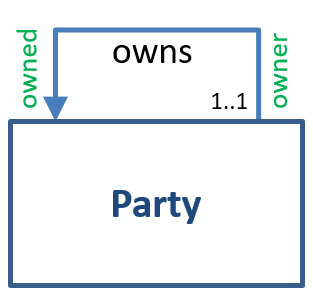 The seemingly simple notion of 'representation' turns out to be quite elusive in various circumstances. The painter Rene Magritte was heavily reproached for writing "Ceci n'est pas une pipe" (this is not a pipe) under a painting that showed a pipe. But he was right: you cannot stuff the image of a pipe in the same way you stuff the pipe that it represents.

In general, representation is quite complex, as can be readily experienced when diving into Semiotics, that studies the workings of signs (i.e. anything that communicates a meaning that is not the sign itself). Our terminology model specifies that a term (within a specific scope/context) refers to (the definition of) a concept, which is one way of representing (intangible) ideas.

'Representation' is a notion that seems simple enough to grasp, but turns out to be more elusive when trying to formalize it. Merriam-Webster has several definitions