This pattern describes how terms are scoped (which software engineers call 'namespaces'), how parties govern such scopes/namespaces, and that if you use criteria to define/specify terms, people can test if they have the same understanding of a term by making sure that everyone reaches the same conclusions as they evaluate such criteria in various relevant use-cases.

The prime objective of working with a terminology is to enable individual members of a community to understand the words and phrases that are used by its members in the same, single meaning. This is to say that the differences in the individual understandings of words or phrases by different members of the same community do not pose any problems in their collaborations.

This suggests that (members of) a community need the ability and means to (a) establish and maintain (i.e.: own) their own terminology, and (b) to ensure it is fit for the purpose of eliminating such misunderstandings.

More concretely, they need the ability and means to

Once a community has its terminology in place, it may want to establish a glossary that 'renders' that terminology and serves as the authoritative reference for the (crucial) terms used by its members. This glossary is also a valuable reference document for a non-community member, as it helps him/her to (better) understand the (verbal or written) communications authored by that community, i.e. it helps to 'map', or 'translate' the terms of that community to words or phrases that the person uses itself, which is prerequisite for effectively engaging with that community.

Such terminologies and mental models differ from those created for/by communities in the sense that it is basically just a repository of words and phrases that communities may adopt within their own scopes. They have no other authority than what they can derive from being used in/by communities.

The benefit of creating and maintaining such terminologies and mental models lies in the fact that they can be developed with less of a bias of developers than if they were developed in a community (that is there to serve its own interests). As such, they may play an important role as different communities seek to establish a language for cooperating with one another.

This pattern has two basic parts:

Here is a visual representation of this pattern, using the following notations and conventions: 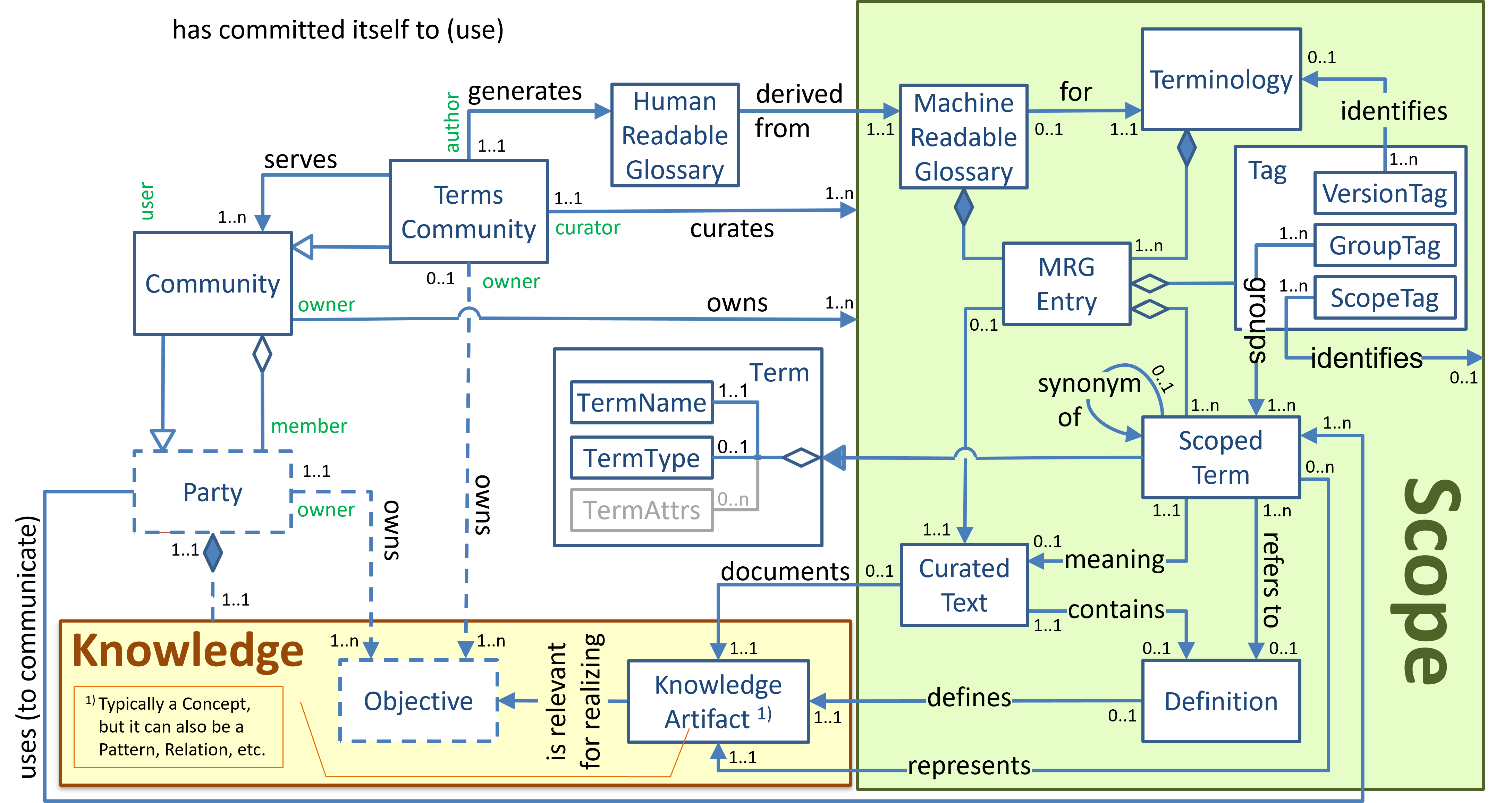 Members of a community that want or need to collaborate with each other may feel the need for a terminology that helps to effectively prevent misunderstandings within the community as they may hamper collaboration. Communities typically express this need as a wish for creating a glossary.

Note that this does not preclude community members to use terms defined in other scopes. The combination of a tag that identifies (the scope of) a terminology (so called scope tags) and a term unambiguously identify the concept (and its definition) to which that term refers within (the scope of) that terminology.

A terms-community is a community that

We refer the reader to the governance and management pattern to learn more about transferring such results between a terms-community and the communities that it serves.

Note that for a terms-community to serve itself, it may want to commit to a terminology such as the one we are developing here.

Every terminology is scoped, i.e. part of a scope. This scope also consists of definitions, scoped terms, and various kinds of tags. These components of the scope exist for as long as the scope exists. Note that if a scoped term ceases to exist,terms with the same name typically continue to exist in the scope(s) of which they are still a part.

Apart from the multiplicity constrained that are showed in the figure, some additional rules apply:

The intangible concepts are important because this is where the misunderstandings live. The knowledge of a party uses a subjective conceptualization of the world (that the party has perceived to be living in for as long as it exists) for its individual reasoning, arguing, communicating, decision making etc. Because of this, two parties that collaborate (i.e.: form a community) cannot be expected to have the same conceptualizations. However, it is a common belief that if one uses a term to refer to a concept in its knowledge, the other will then relate it to 'the same' concept within its own knowledge, that we should not assume actually exists. For example, when one of them uses the term 'identity', it knows which concept that relates to within its own knowledge. However, others need to hallucinate as to what that concept might be, and typically respond by thinking that the concept that the term refers to in their own knowledge would be its intended meaning. In many cases that doesn't pose a problem, because the concepts of both knowledges are 'sufficiently the same'. In other cases, the differences in meaning may be such that it disrupts the collaboration between the parties. And that is when it helps to have 'good definitions', because they have the property that collaborators can assess whether or not the concepts in their knowledge (that a well-defined term refers to) are 'sufficiently the same'.

In order to keep the work of devising definitions to a minimum, it helps to know the objectives that the members of the community collaboratively seek to realize. Any definition should define a concept that is relevant for that collaboration. Other definitions are just useless work.